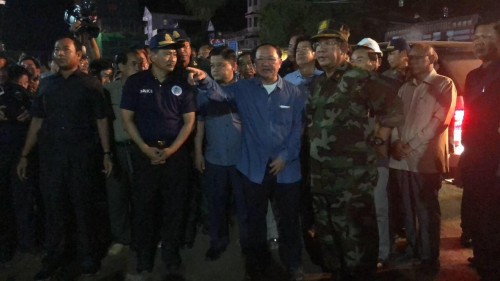 Cambodian Prime Minister Hun Sen arrived Sihanoukville this Sunday night to rescue the victims of the collapsed building.
It is worth noting that a seven-storey building in the west coast of Cambodia’s Sihanoukville, about 230 km from the capital Phnom Penh, collapsed at about 5 a.m in the morning of Saturday, 22 June.
21 bodies of construction workers, four females, were found dead; and 24 others, two females, were injured, according to Sihanoukville govenor Yun Min.
Authority confirmed that 50 per cent of the area had been excavated.
The Chinese-owned 15-meter wide and 30-meter long building, completed 80 per cent, is located near Arunreas Garage in Number 4 commune of Sihanoukville city.