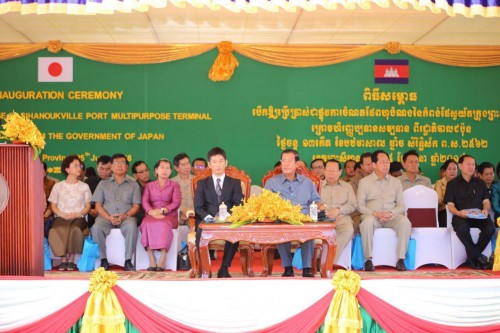 Cambodian Prime Minister Hun Sen stated that Cambodia’s Sihanoukville port used to accommodate only 10,000 tons of containers; today the port could accommodate up to 50,000 tons and it requires further expansion, speaking at the inauguration for the official use of the $74 million Sihanoukville autonomous port’s multipurpose terminal on Monday.

The new terminal is 330-meter long and 13.5-meter deep. It features a 200-meter logistics and oil exploration facility, and 7.5-meter one for tugboat under the government’s contributory funds and the concessional loan of Japan through the International Cooperation Agency (JICA) in the framework of the implementation of the Sihanoukville Port Multipurpose Terminal Development Project.

Prime Minister Hun Sen said that the port is an important national economic corridor for the exchange of Cambodia’s agricultural and agro-industry products with the world’s market. The port links to National Road 2, 3, and 4, as well as railroads and, particularly, Phnom Penh-Sihanoukville highway that will launch its construction soon.

“I foresee that the new port does not respond effectively to the transport sector compared to other countries. This phase VI is not the final stage and that JICA will help us extend the capacity of our port”, stated the premier.

Prime Minister Hun Sen reminded that this autonomous was one of the greatest achievements of King Father Norodom Sihanouk. During the 1970s wars, the port and other railroads were damaged. Thanks to the win-win policy, the port has been developed gradually.

According to the premier, some individuals and companies requested to put the Sihanoukville port under the control of a private company, but he disagreed, as the port belongs to the nation and provide so much income for the kingdom.

Sihanoukville Autonomous Port has entered stock exchange and become another source of capital for the port development, he underlined.