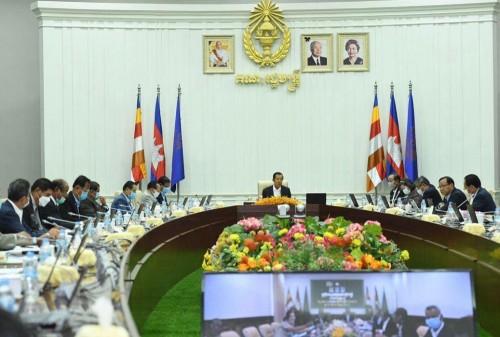 Cambodian Prime Minister Hun Sen announced to allocate USD 150 million of the national budget to build roads in Siem Reap, speaking at a cabinet meeting on Friday morning.
“This morning, Samdech Techo Hun Sen announced a USD 150 million budget to build roads in Siem Reap that will help improve Siem Reap’s infrastructure and provide jobs for people affected by COVID19,” Information Minister Khieu Kanharith quoted the premier as saying.
Premier Hun Sen said he will preside over the opening of construction to build the 38 lines of roads in Siem Reap, the former capital of the Khmer Empire.
“The construction of these roads will improve the living standards of the people and will boost the national economy after COVID19,” he underlined.
The Strongman thanked all the ministries and institutions for saving up USD 600 million thanks to reduced expenditure during COVID19, which can now be used to develop the country.