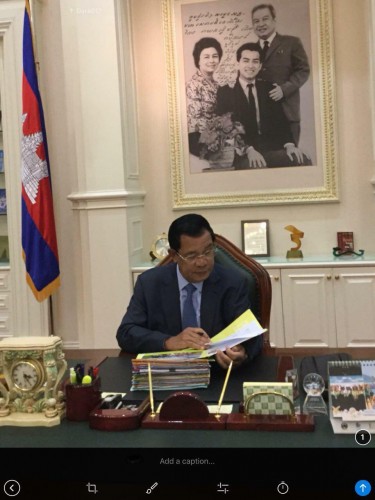 Prime Minister Samdech Akka Moha Sena Padei Techo Hun Sen have pointed out that 15 out of 20 registered political parties had been so far recognised by the National Election Committee (NEC) for the forthcoming parliamentary elections.
While presiding over the groundbreaking ceremony for the construction of the 135.21-kilometre-long road portion from Prek Kdam in Kandal province to Thlea Ma’am in Pursat province this morning, Samdech Techo Hun Sen expressed his hope that all the 20 registered political parties will be officially recognised by NEC to join the 6th general elections in July.
The Premier once again called on local authorities to provide good coordination for all the political parties that will participate in the upcoming election.
Even though the Cambodian People’s Party (CPP) wants to win the election, it wants to win with justice, therefore all political parties must have equal access to the election campaign, stressed Samdech Techo Hun Sen, also President of the ruling CPP.
In total, 20 political parties have registered at NEC to compete in the July election during the two-week-long registration period, from April 30 to May 14.
According to the regulations and procedures of the Law on Election of Members of the National Assembly of the 6th legislature, NEC must examine and make a decision at most seven days after receiving their application forms. If NEC finds something wrong in the application forms, it will give five days for the concerned political parties to make a correction.
Cambodia will organise the sixth national election on July 29, 2018, and NEC has already announced the period for the political campaign that will fall from July 7 to 27.
In the previous national election on July 28, 2013, eight political parties took part in the election – CPP, the dissolved Cambodia National Rescue Party, the royalist FUNCINPEC Party, League for Democracy Party, Cambodian Nationality Party, Democratic Republic Party, Khmer Anti-Poverty Party, and Khmer Economic Development Party.