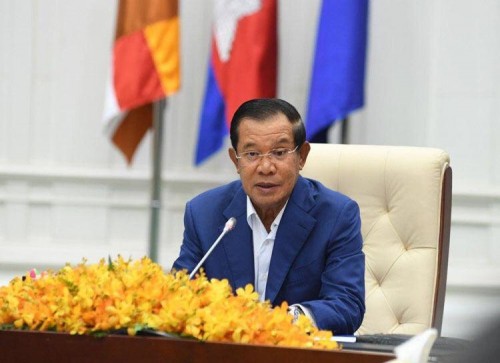 Samdech Akka Moha Sena Padei Techo Hun Sen, Prime Minister of the Kingdom of Cambodia, presided over here this morning a meeting with members of the Supreme Consultation and Recommendation Council to review their work achievements in the fourth semester.
On the occasion, Samdech Techo Hun Sen mainly focused on the outbreak of COVID-19. He reiterated that the pandemic is not a particular problem of Cambodia, but a global issue.
Based on historical aspect, he said, the extent of COVID-19 outbreak is larger than World War II, because the war at that time only affected some countries, but COVID-19 has been hitting all countries around the world, even a small island in the middle of the ocean.
The Premier thus called on all the participants to give constructive comments on the preventive measures taken so far by the Royal Government as well as the measures in response to the current social and economic challenges caused by the pandemic.
The Supreme Consultation and Recommendation Council was established on Sept. 6, 2018 by a royal decree on the initiative of Samdech Techo Prime Minister after the 6th national election.
The council is composed of 16 out of the 20 political parties that participated in the 2018 national election. It has the role of advising the Royal Government outside the parliamentary framework in order to improve work efficiency for the benefit of the people and the potential of social development.