PM Holds a Get-together with Cambodian Students in Vietnam 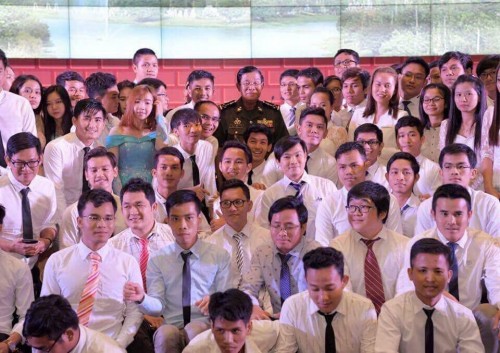 Cambodian Prime Minister Samdech Akka Moha Sena Padei Techo Hun Sen held a get-together with 103 students who are pursuing their studies in the Vietnamese province of Binh Duong on June 21, during his trip to Vietnam to mark the 40th anniversary of the process to overthrow the Pol Pot genocide regime (Khmer Rouge regime).
According to his official Facebook page, on the occasion, Samdech Techo Hun Sen expressed his support and encouragement to the Cambodian students continuing their studies overseas, including Vietnam and Russia, and urged them to learn other foreign languages beside Vietnamese, especially English and Chinese, for more job opportunities in the future.
In addition, the Cambodian premier encouraged them to take part in building connectivity between youth and youth, people and people, and not to act as enemy with the neighbouring countries, stressing that a country can be developed thanks to internal stability and good relations with neighbouring countries.
Samdech Techo Hun Sen considered all students as an important part for good relationship with neighbouring nations, and development of the nation and the region.
Following on the same day, Samdech Techo Prime Minister and his delegation attended a reception hosted by Vietnamese Prime Minister H.E. Nguyen Xuan Phuc.