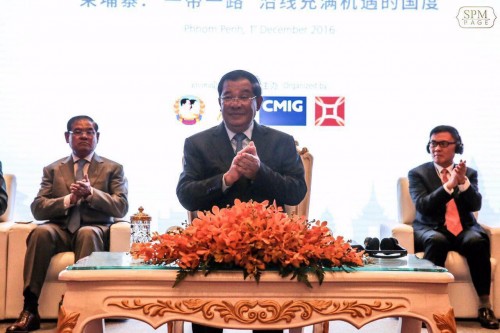 Cambodia’s Prime Minister Samdech Akka Moha Sena Padei Techo Hun Sen highlighted here this morning some potential Chinese investment projects in the Kingdom.
This year, the Council for the Development of Cambodia (CDC) recorded 84 projects invested by Chinese businessmen worth in total US$716 million or 24.69 percent of the total investment capital in Cambodia, said the premier while presiding over the opening ceremony of the Cambodia-China Business Forum and Financial Development Forum held under the theme “Cambodia: The Kingdom of Opportunities Along the ‘One Belt, One Road”.
From 2000 to August 2016, the construction sector attracted US$4.3 billion foreign investment in 284 projects on 12.5 million square metres, and China ranked top among 18 countries, he added.
For the financial sector, among the 36 commercial banks, 11 specialised banks, and 8 representative offices of foreign banks in Cambodia, there are two Chinese commercial banks, and a specialised bank with a total capital of US$223 million.
Last year, Cambodia attracted 4.8 million foreign visitors, and the Chinese tourists ranked number 2 with 700,000 visitors. This year, the country is expected to receive 5 million foreign tourists, of them 800,000 Chinese, he said.
According to Samdech Techo Hun Sen, 93 direct flights from China to Cambodia (51 flights to Phnom Penh, 30 to Siem Reap, and 12 to Preah Sihanouk province) are operated weekly.