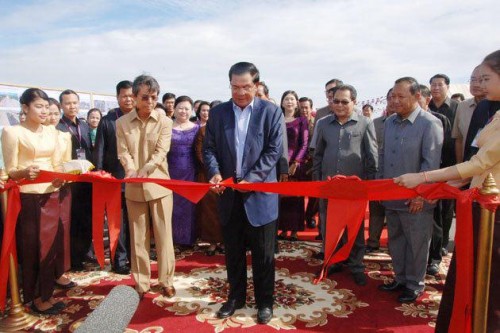 Samdech Akka Moha Sena Padei Techo Hun Sen, Prime Minister of the Kingdom of Cambodia, expressed here this morning his satisfaction with the capital city’s development under his leadership.
Addressing to the inauguration ceremony of the Samdech Techo Hun Sen Blvd, known as the 60-meter Street in Choeung Ek Satellite City, Phnom Penh, the premier underlined that Phnom Penh land area has been expanded more than doubly, from about 300 to some 700 square kilometres currently.
Skyscrapers of 40 to 50 floors have been in operation and under construction, he said, adding that Phnom Penh will have a 125-floor or 520-metre-tall building soon.
At the same time, Samdech Techo Hun Sen expressed his commitment to further put all his efforts to serve the people under the cool shade of His Majesty Norodom Sihamoni, King of Cambodia.
Phnom Penh is the capital and largest city of Cambodia. It is a centre of security, politics, economy, cultural heritage, and diplomacy. It is a place of diverse economic and urban growth that offers a unique blend of traditional charm and urban bustle.