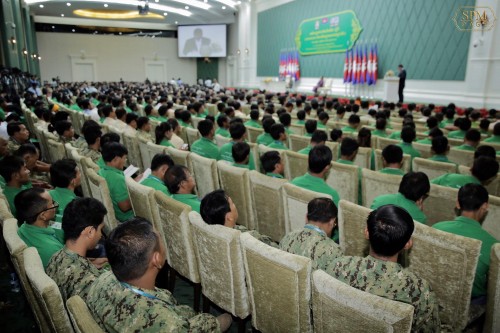 Cambodia remains a nation rich in natural resources and biodiversity, reaffirmed Prime Minister Samdech Akka Moha Sena Padei Techo Hun Sen at the 2nd National Forum on “Protection and Conservation of Natural Resources” held here this morning at the Peace Palace.
According to the premier, natural resources, forests, and biodiversity in Cambodia are still in a healthy situation, covering some 56 percent of Cambodia’s total land area of 181,035 square kilometres.
Samdech Techo Hun Sen also made a strong reaction against deforestation in the country and highlighted the Royal Government of Cambodia’s commitment to protect the forests.
Moreover, he criticised a group of businessmen who have been involved in illegal logging by considering them as the nation’s criminals, and called for a compilation of their biography.
Up to now, Cambodia has in total 46 natural protected areas and 3 biodiversity conservation corridors covering more than 7.3 million hectares, including the newly-established 32,000-ha natural heritage site of Phnom Yat in Sangkat Pailin of Pailin northwestern province.