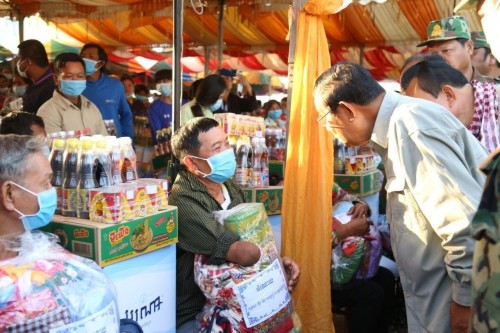 Samdech Akka Moha Sena Padei Techo Hun Sen, Prime Minister of the Kingdom of Cambodia, has appealed for reservation of seeds for distribution to farmers who have been affected by floods.

Speaking to flood victims in Banteay Meanchey province this morning, Samdech Techo Hun Sen called on all relevant authorities to prepare seeds for farmers after the floodwater recedes.
The call was made when 19 of the 25 provinces and capital city have been hitting by flash floods. Some 410,000 farmers are reported to be affected by the flood while hundreds of thousands of hectares of rice fields and subsidiary crops have been inundated and damaged.
Battambang and Banteay Meanchey provinces are the most affected provinces.
H.E. Veng Sakhon, Minister of Agriculture, Forestry, and Fisheries, has ordered his line officials to conduct assessment of affected farm land before seed distribution to farmers will be made.
The ministry has reserved seeds, both rice and subsidiary crops, for distribution to farmers in the post-flood period.