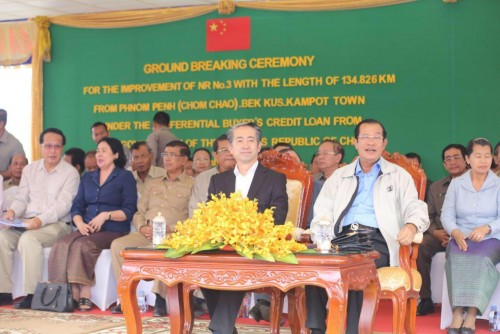 Prime Minister Hun Sen called on all authorities to facilitate all political parties to implement their political activities and race in the 6th mandate National Assembly member election to be held on July 29, 2018.

The appeal was made at the Ground Breaking Ceremony for the improvement of National Road No.3, with the length of approximately 135 km, from Phnom Penh’s Chom Chao-Bek Kus-Kampot with estimated cost of more than $200 million under the preferential buyer’s credit loan from China.

“I would like to appeal to authorities at all levels to avail opportunities for political parties to take part in the elections, as some political parties have already registered to run election including Grassroots Democracy Party,” said Prime Minister Hun Sen.

“For the 6th Mandate of the National Assembly Election, at least 10 political parties have deposited their finance at the Cambodia’s National Treasury; some parties still need more thumbprints, this and that to meet legal requirements,” stated the premier.

“Having many political parties racing in the new mandate election is a reflection of multi-party liberal democracy in Cambodia and that the absence of a party dissolved by the court’s legal decision won’t make the Kingdom’s multi-party democracy dead,” the premier said.