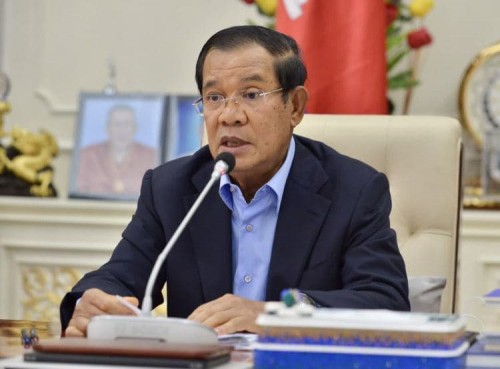 Prime Minister Samdech Akka Moha Sena Padei Techo Hun Sen has appealed to his compatriots not to get into a panic, but to increase their attention to protect themselves by following the health safety guidelines of the Ministry of Health.
The appeal was made after a new case of COVID-19 was detected on a Cambodian woman in Phnom Penh this evening. She is the spouse of a senior official at the Ministry of Interior.
This is the first ever case of community transmission in Cambodia, he underlined, adding that it concerns Phnom Penh capital, Siem Reap province, and even Banteay Meanchey and Mondulkiri provinces.
The Royal Government is taking immediate measure by tracking down all those who came in direct and indirect contact with the woman, he said.
Samdech Techo Hun Sen also called on his compatriots to avoid gatherings. Anyway, he continued, schools in the concerned capital and provinces will not be shutdown, but need to strengthen their preventive measures.
The Premier is currently in Siem Reap province for the groundbreaking ceremony for the construction of 38 streets in Siem Reap city. He confirmed that the event will not be postponed, but held as scheduled on Nov. 30.
With the new patient, the total confirmed cases in Cambodia rose to 309, of them 299 have successfully recovered.