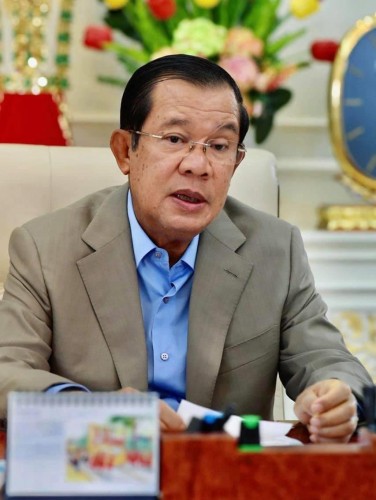 Everywhere I go, every meeting I attend and every news report I read there is one issue that continues to dominate: PM Hun Sen’s effective leadership during the Covid-19 crisis.
The view is that without the PM’s guidance and instructions, the country would have suffered a much greater, and more severe, impact from the disease.
No one has died from the Covid-19 in Cambodia, despite 141 cases in the country, including the 10 patients currently hospitalised. Foreigners are also among the cases detected here.
No lockdown, but greater cooperation
Cambodia never imposed a lockdown and e-learning and digital economy have been introduced; while concerned institutions have closely worked with the World Health Organisation (WHO) and other health agencies to fight the deadly Coronavirus.
On the top of that, Cambodia, despite limited resources as a small Least Developing Country (LDC), did not just stand and watch as others, such as the U.S Westerdam cruise ship, sought help while every other country, including U.S. controlled island of Guam, denied the vessel entry into their ports in February 2020.
Cambodia welcomed the entry of the cruise ship at its deep seaport of Sihanoukville with a big heart and open arms, as seen when the Premier greeted them one by one from the ship. It was an act of courage and humanity.
Vong Seyvisoth, standing Secretary of State of the Ministry of Economy and Finance, likened the Premier’s leadership style to “the manner of China’s Confucius” that fit well in the context of the Kingdom of Wonder.
His leadership style convinced the public to stand behind him, and that made it a successful story in many aspects.
Cambodia can stand today thanks to three main factors: the leadership of PM Hun Sen; the government’s policies and regulations to cope with the developing trends of Covid-19; and the behaviour and participation of the people individually.
The country’s government took a number of appropriate measures—while trying to provide a fair balance between the momentum of economic and trade activities with the reality—to fight Covid-19.
The Royal Government of Cambodia recruited more than 400 volunteers to assist over 20,000 medical professionals and staff already dispatched to all provinces with the support of the Ministries of Defence and Interior. More than 3,000 rooms were made available at hotels, hostels, and school buildings. Millions of dollars were spent to fight Covid-19 and the government also spent for other fields affected by Covid-19.
The government cooperated with neighbouring countries as well as at regional and global levels to minimize impact from the virus. Cambodia actively participated with the ten-country bloc of the Association of Southeast Asian Nations (ASEAN) as well as with China, US, Russia, and EU via tele-conferences meetings in which the topic of joining hands to fight Covid-19 is the centre piece.
The government, however, acknowledged that despite such efforts, Cambodia, like other countries including the superpowers, cannot be immune from such an airborne disease.
There are more than 9.1 million Coronavirus cases globally, including more than 474,000 deaths, and more than 4.9 million recoveries have been reported.
Vongsey Vissoth told a news conference on July 8, 2020 at the ministry, that Covid-19 brought us too many uncertainties and unprecedented impacts in many ways in terms of social interaction, economics, trade and investments, among others.
Over the last six months many small and medium enterprise (SMEs) have been hard hit, although there is less impact on telecommunications and agriculture.
More than 130,000 workers lost their jobs as more than 450 factories, including those which shut-down or suspended operations, from the garments, shoe and travel goods sector.
Cambodia’s exports dropped to US$3.78 billion for the first six months of 2020 from US$4 billion for the same period last year.
Cambodia’s economy has been hit hard by Covid-19.

Prime Minister Hun Sen says that the country’s growth would be -1.9 per cent for 2020 but expected to rebound in 2021.
The Asian Development Bank says that the country’s GDP growth rate is expected to be -5.5 per cent in 2020 before rebounding 5.9 per cent in 2021. The World Bank forecasts -1 per cent to -2.9 per cent for 2020.
“Our country’s growth and developments would have been much worse from the hit by Covid-19 without PM Hun Sen’s wise leadership,” Vongsey Vissoth told a news conference room packed with reporters and officials.
Always well-prepared for any unprecedented event
Cambodia has learned from it good and bad experiences since the 1960s and shaped the leaders to be well-prepared and ready for any unexpected event. The unexpected happened, and that is when Covid-19 landed in Cambodia in February 2020.
Cambodia never expected the deadly Covid-19, but the partial removal of the EU’s Generalised Scheme of Preferences (GSP), the Everything But Arms (EBA) scheme was.
Vongsey Vissoth says “Now we spend parts of the money we saved to fight the Coronavirus. We will spend US$1 billion this time and the remaining US$2 billion next time. In the future it depends on the reality.”
Cambodia is good at saving, the government saved more than US$3 billion over the last six years (2013 to 2019) during which time Cambodia’s GDP was 7 per cent and those savings will be invested for when the EU takes off 20 per cent preference that Cambodia has already affirmed.
As stated by Prime Minister Hun Sen at the graduation ceremony in Phnom Penh, Cambodia will not ask for the return of EBA 20 per cent cut.
“We have prepared from afar for impacts from the EBA withdrawal. I have already approved plans to forgo this or that percentage of taxes if this or that impacts from it happens, for factories to keep their competitive advantages,” he said.
The Premier further said, “the EBA is surely to be taken away one day, if not sooner, later.”
Today, the government has allocated more thanUS$600 million for an economic stimulus package for 2020-2022.
“Our economic strategic plan has now changed from offensive to defensive… we also have to deal with U shaped, from earlier V shaped economic outlook,” said Vongsey Vissoth.
Learn to adapt to the new environment as Coronavirus persists
The government had expected that Cambodia’s economy will recover after six months being hit by Covid-19, but it is now full of uncertainties and nobody knows how long the Coronavirus will last. Hence the adaption from the V shape economic outlook to, now, the U shape prospect that Cambodia has to deal with.
This is the smart solution while we continue to adhere to WHO’s instructions. If any person gets sick of the Coronavirus, they deserve treatment. We keep fighting the Covid-19 because no-one knows how long it will take to have medicine or vaccine available to defeat it. It may take years to do so and cost millions of dollars for such efforts.
Cambodia’s government and the people will never allow Covid-19 to defeat us, prompting us to keep fighting it while adapting ourselves to the new environment while the virus exists.
Some scientists believe that such an airborne disease will continue to float in the air globally. That prompted Cambodia to seek ways to gradually reopen the economy, business, and schools operations based on the reality of the situation.
The new-amended investment law, Cambodia-China Free Trade Agreement
Although the garment sector has been hit hard by Covid-19 over the last six months, making exports drop, although it was partially supported by exports of bicycle and commodities to the EU market.
The country expects its exports to continue to fall in the future and so will foreign direct investment (FDI). Therefore, the Ministry of Economy and Finance has drafted a new amended investment law that will be soon approved by the government to attract investments.
The country’s tourism sector may continue to be depressed by the Coronavirus for some time to come.

The government is also working to address trade barriers and excessive regulatory procedures so to facilitate trade, investment and business operations moving forward, given the fact that we are living in a competitive world.
Many officials have also shared with me the idea that, the country has to re-open gradually while Covid-19 continues to exist so that Cambodia can survive. The country cannot continue temporary closures of some fields like this forever. We also need to deal with the public investment framework, budget framework, and investment law framework amid this hard time.
The Cambodia-China Free Trade Agreement is expected to be announced by the two Ministers of Commerce within the next two or three months and that PM Hun Sen will fly to Beijing before August 12, 2020 to sign that deal.
Cambodia will also seek financial loans for 2021 to support its economic development since the country is still in good shape in terms of Cambodia’s debt that represents as much as 30 per cent of its GDP value.
A Cambodia-South Korea free trade agreement is still in negotiation and it is hoped agreement will be reached soon. Cambodia looks to investments from the Republic of Korea, Japan, China and elsewhere as it moves forward.