If I Am Not Strong, the Ill-intended Groups Will Destroy Cambodia: PM Hun Sen 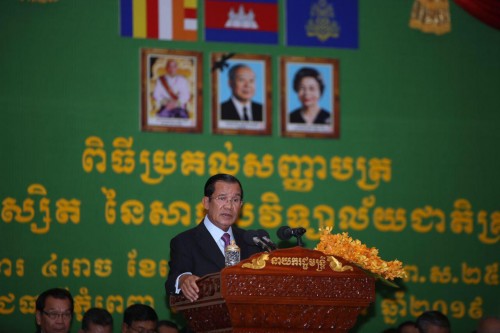 Speaking at the graduation ceremony for National University of Management at Koh Pich on Tuesday, the Premier stated that if he is incapable to protect Cambodia, the kingdom would be devastated.

Prime Minister reassured the compatriots that he is healthy and spends enough time on physical exercise as recommended by doctors. Doing so will allow him to continue protecting the hard-earned peace and development in Cambodia.

Former leader of CNRP Sam Rainsy, a convict living in exile, continuously appealed for the armed forces to topple the government; and urged the international community to cut aids, eliminate trade preferential scheme like EBA and GSP, and stop buying Cambodian products.

The Strongman Hun Sen condemned the oppositions for leading internal and external movements without concerning the fragile peace.