No Taxes on Farmlands If CPP Continues to Lead, Says PM Hun Sen 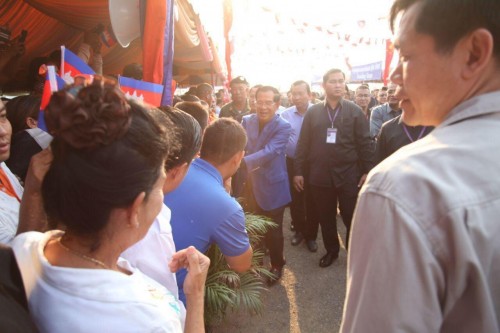 As long as Cambodian People’s Party (CPP) continues to win the elections, the Royal Government will not charge any taxes on farmlands, Prime Minister Hun Sen addressed Wednesday at inauguration ceremony of National Road 58.
The ceremony was held in Poipet city, some 400 kilometres from Phnom Penh capital.
“If the CPP continues to lead for the next 100 years, there will be no taxes on farmlands. We have not collected taxes on farmlands for 41 years,” the premier said before Chinese Ambassador to Cambodia Wang Wentian.
The newly-built National Road No. 58 links Poipet city in Banteay Meanchey province to Samrong city of Oddar Meanchey.
According Minister of Public Work Sun Chanthol, the construction of the 174 km road was funded by China’s grant aid financial allocation of Royal Government of Cambodia with a total cost of some USD 123 million.
The construction lasts 43 months from June 2015 to January 2019, the minister said.
National Road No. 58 is a strategic road for national defence and economic and tourism development; it will contribute to enhancing internal connectivity and improving local people’s living standard and logistics system of Cambodia, reported state media AKP.