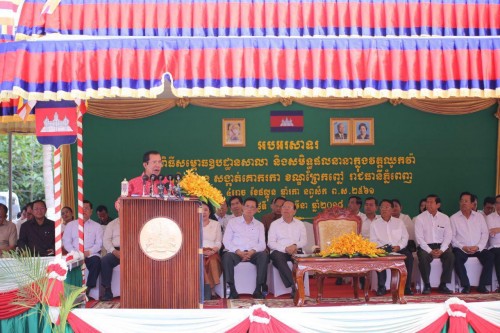 Prime Minister Hun Sen announced that he will not request to His Majesty King for the third royal pardon for former opposition leader Kem Sokha, speaking at a ceremony in Chhoukva Pagoda located in Phnom Penh’s Prek Pnov district on Monday.
“The current detainee, do not expect for another favor from Hun Sen,” said the premier.
Prime Minister has the rights to propose to His Majesty King to grant a royal pardon to release the detainee, according to Prison Law of Cambodia.
Kem Sokha was imprisoned in 2016 for public defamation and in 2016 the court sentenced him to five months imprisonment and a fine of $200 for not appearing to the court. The premier has requested for the King’s pardons to release Kem Sokha for these two times.
Kem Sokha once again was arrested at his house at 00:35 am on September 3, 2017 by justice police in his house located in Toul Kok, Phnom Penh. The arrest was made when Sokha appeared in a video to initiate plans to topple the government. He is facing a penalty of 15 to 30 years in prison based on article 443 of the Criminal Code.