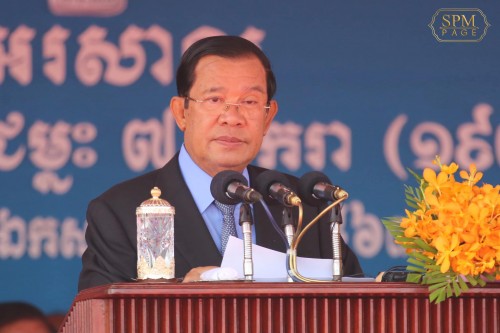 Cambodian Prime Minister Hun Sen considered 7 January is a victory day that Cambodian nation has stood up once again and marched on a correct path holding ownership of their destiny, addressing at the the 41st Anniversary of January 7 Victory Day, at Koh Pich on 7 January 2020.
Samdech underlined that the past 41 years has been full of solidarity, heroism and victories. The determination and commitment in the past 41 years has transformed our motherland from ashes to its proudest development stage.
“Today is the 41 anniversary of the 7 January 1979 historic victory day overthrowing the genocidal regime of Pol Pot, saving the Cambodian people to survival from mass killing under the perfidious regime in a timely manner and ended the darkest era of Cambodia, while ushering a new era of independence, freedom, democracy and social progress,” the premier stressed.
Prime minister added that Cambodian people both inside the country and abroad, are greeting this anniversary of historic victory day in a memory of gratitude to the brave sacrifices of uncountable cadres, combatants, and compatriots, and those of the Vietnamese voluntary army in the fight to liberate the Cambodian people from the regime of genocide, and defend their revival.
After the five years’ war, Cambodia rolled into genocidal disaster administered by the butchers Pol Pot bringing the country to nil. Were there not the 18 March 1970 coup, there would not be the regime of genocide, national sustainability interruption would not have happened, and the Cambodian people would have lived in peace and prosperity.
The premier raised that the National United Front for Salvation of Kampuchea (NUFSK) on 2 December 1978 were formed leading people to fight and rescue the country from the brutal regime.
It is worth noting that NUFSK, with
strong support from people of every corners and assistance provided by the Vietnamese voluntary army, peace and justice loving people in the world, brought down the regime of genocide scoring the brilliant victory on 7 January 1979.
“With the victory, the Cambodian people have won back their ownerships of the motherland and destiny. The Cambodian people dubbed the 7 January Victory as their second birthdays. Were there no January 7 victory, we would not have what we have today. The 7-January victory belongs to every Cambodia and humanity who love peace, freedom and justice. That is the historical truth,” Samdech underlined.
He added that peace and political stability are firm foundations for Cambodia economic development to score growth of 7.1% in the context of low inflation, stable exchange rate, and increasing foreign reserves. The growth supported by positive up-curve in service sector and high
growth in industry, though agriculture continues to contribute low share. Political stability restores local and foreign investors’ confidences to put in more capitals, especially in the
field of construction and manufacturing. Local consumption and international trade have also taken notable thrusts.
Cambodian people’s living conditions have improved reflecting though a GDP per capita of USD1,548 in 2018 to roughly USD1,679 in 2019. The poverty rate has dropped to below 10% at present. Cambodia has maintained a labor security where there are 0.3% of unemployment rate.
Cambodian strongman reaffirmed that the Royal Government has set out and strived to implement national policy of social protection aimed at uplifting wellbeing and social solidarity, while trying to score maximum reduction of poverty.
Through the efforts, the Royal Government has provided two systems of social protections – one to provide social protection to those living under and/or anywhere near the poverty line, focusing mainly on children and women in pregnancy, disabled, and elderly people without someone to depend on. Another system is to provide risk protection on pension, health, occupational risks, unemployment, and handicap to those people employed in registered and non-registered economic sectors.
The Royal Government has offered allowances for female workers delivering through social security fund, while implementing cash allowances to female with pregnancy and infants/children under two years old in family with equity or priority certificates to relive burden, improve livelihood and nutrition for women and children.
The Royal Government has also set up a Kuntha Bopha Fund to provide health protection with quality and free of charge for Cambodian children. The civil servants and armed forces are receiving their salaries increase from January through to April 2020. Those employed in the garment and shoes making sectors whose minimum wages was 182 USD, from January 2020 will have their wage increase to 190 USD, not including other advantages, especially those provided by social protection policy.
In the meantime, the Royal Government is also placing high thought on lifting up livelihood of farmers through efforts to strive production, maintain stable prices and widen market access for agricultural produce.
In the process of communal development, the Royal Government has provided gradual increase of communal funding. Meanwhile, the government has been working to decrease price and to expand transmission network of electricity and clean water, while offering a number of tax favors that are giving
benefits to people with low incomes.
Cambodian Prime Minister also reaffirmed that the Cambodian People’s Party, who led the struggle to liberate the Cambodian nation from the regime of genocide, continues to live and share sufferings and happiness with our people. It always serves as backing for our people in every circumstances in the course of national defense, people’s revival, peace and national reconciliation, and restoration, reconstruction and socioeconomic development.
Samdech also called on compatriots to continue to unite and come together in a solidarity around the Royal Government under the roof of the Constitution of the Kingdom of Cambodia and the cool shade of our revered His Majesty the King in our way forwards to prosperous future.
The premier also availed his high respect and evaluation to political parties and organizations in civil
society for their active participation in keeping peace and political stability, uplifting national sovereignty, strengthening democracy, rights and freedom, rule of law, and development.
Samdech lastly conveyed his sincere thanks to friends – near and far, development partners, and international organizations for their assistants to the Cambodian people.