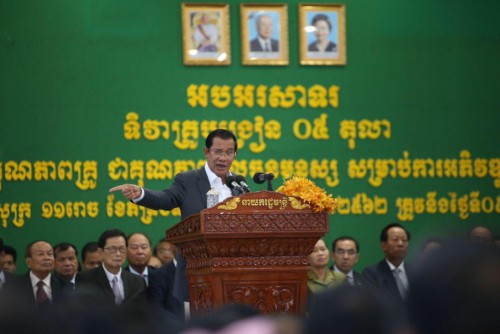 Cambodian Prime Minister Hun Sen said that he will not request for amnesty for former opposition leader Sam Rainsy again, and that he would cut his own right hand if he helps the convicted opposition leader, addressing at the commemoration of World Teachers’ Day 2018, held in Phnom Penh on Friday.

Sam Rainsy, who has fled overseas for more than three years, is facing numerous charges over alleged crimes he has committed, including incitement, defamation, and treason.

He was sentenced to five years in prison for forging Cambodian-Vietnamese border documents and two years in prison on charges of defamation, sued by Deputy Prime Minister Hor Namhong.

Prime Minister Hun Sen said that the Rainsy always propagandized for national disunity. After being amnestied, and able to compete in the election, Rainsy continued to protest which seriously affected people’s living and national economy.

Rainsy’s protests did not only go against the election result, but also aimed to topple the legitimate government.

“I already reiterated that under any price, Cambodian people shall be protected from wars,” said the premier.

Prime Minister Hun Sen claimed that Cambodia is a democratic country with over 83% of voter turnout.
As Cambodian people favor peace and development, he urged all political parties and their members to avoid incitement for hatred, as it would destroy Cambodia from one generation to another.