Many Do Business with China, Why Can’t Cambodia: PM Hun Sen 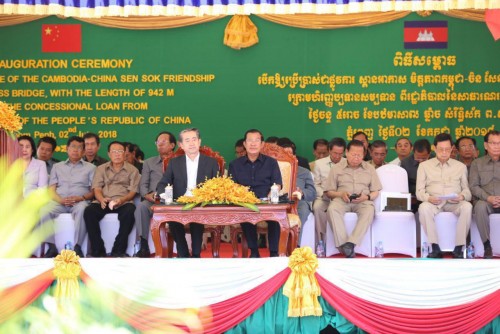 Presiding over the inauguration ceremony of Cambodia-China Sen Sok Flyover Bridge on Monday, Cambodian Prime Minister Hun Sen once again reacted to concerns over the presence of Chinese in Cambodia.

“Many countries are doing business with China; why ban Cambodia from doing so?” the premier asked.

He said that individuals or countries that expressed concerns and criticisms over Chinese investment in Cambodia did not dare to invest in Cambodia.

China, as the second largest economy in the world, does not grow alone; her growth benefits many other countries, including Cambodia.

“If we do not have Chinese investment, where would our electricity source come from? Some countries are jealous of China, and then criticized Cambodia […] But, do we have any country to invest or to bid for the hydroelectric power projects in Cambodia? No. But when China comes, they are jealous,” the premier stated.

The premier emphasized that His Majesty King Norodom Sihamoni and he will follow the decision of King Father Norodom Sihanouk in strengthening Cambodia-China ties.

Cambodia has nothing to lose by strengthening relations with China. Not only Cambodia that benefits from China, but also ASEAN.

He urged the public not to negatively perceive the many Chinese in Cambodia. They came for labor demand, as Cambodian labor force and capacity have yet responded to the Chinese investment in construction sector.