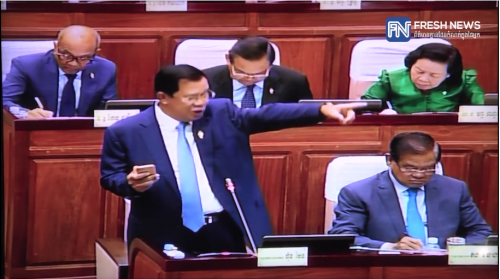 Prime Minister Hun Sen has warned to seize the opposition party’s head office and put it for sale if he wins the lawsuit.

Speaking at the National Assembly, Prime Minister said the current head office of the Cambodia National Rescue Party (CNRP), registered Sam Rainsy’s name, will be seized for sale if he is to win $1 million lawsuit he had filed against Sam Rainsy for defamation.

The premier also warned to seize other properties belonging to Sam Rainsy in Sihanoukville.

On Jan. 18, the Prime Minister’s lawyer filed a defamation lawsuit against Sam Rainsy demanding $1 million in compensation. The lawsuit was filed after Rainsy, allegedly accused the premier of bribing Thy Sovantha, former opposition activist, with $1 million in exchange for her to work support Hun Sen’s ruling Cambodian People’s Party (CPP) and attack the CNRP.

Thy Sovantha had also filed a defamation lawsuit against Rainsy demanding $250,000 which she said she would donate the money if she won the lawsuit.

Son Chhay, a lawmaker of the CNRP told reporters that the premier should reconsider the lawsuit again and demand to lower the severity.

Rainsy, has been in self-imposed exile abroad since late 2015.