Government Budget Is for Roads and Schools, not for New Cars: PM Hun Sen 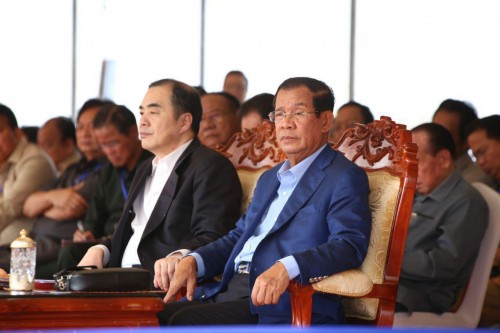 Cambodian Prime Minister Hun Sen announced that under his leadership, the government reserved budget for the development of roads, bridges, and schools, not changing cars for his officials, speaking Friday at the groundbreaking ceremony of Phnom Penh-Sihanoukville Expressway, which he co-chaired, with Chinese Deputy Minister of Foreign Affairs Kong Xuanyou in Kompong Speu province.

“To members of the governments and governors serving Hun Sen’s administration, never request for budget for the new cars. Just drive what you had,” the Premier stated.

Prime Minister considered the development of infrastructure the equitable distributions of economic growth.

“When we build bridges, everyone can use,” he underlined.

China’s loans to the kingdom are for irrigations, roads, bridges, expressways, not for buying cars or jets, he reiterated.