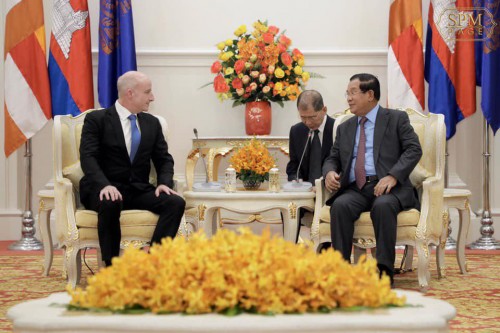 A large German company, which has been investing in Cambodia for over 20 years, has announced to continue its investment in the kingdom.
Markus Lorenzini, CEO of Siements Company, praised Cambodia’s economy progress and pledged to continue investing in the kingdom, speaking in a courtesy call on Cambodian Premier Hun Sen on Tuesday, 8 October 2019, at the Peace Palace.
“Our company has good cooperation with Cambodian Ministry of Mines and Energy. The stability of energy plays important role in attracting investment to Cambodia,” Markus Lorenzini told the premier.
Prime Minister welcomed Siemens’ investment in Cambodia and thanked the company for the good cooperation with Ministry of Mines and Energy on developing energy sector and providing training to the ministry’s officials.
According to Prime Minister, over 70 percent of Cambodian people have access to electricity and that over 90 percent of villages nationwide are connected to the national grids.
Siemens is a global powerhouse focusing on the areas of electrification, automation and digitalization. One of the world’s largest producers of energy-efficient, resource-saving technologies, Siemens is a leading supplier of systems for power generation and transmission as well as medical diagnosis.