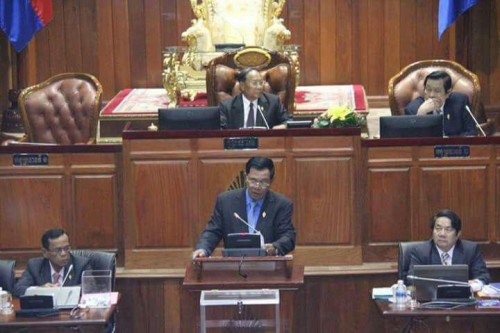 On 4 April 2016, Samdech Techo Hun Sen spoke to the National Assembly session that there are five major reasons behind the Cabinet reshuffle. Firstly, to cease or change functions of some members of the Royal Government in accordance with their requests. Secondly, to provide more functions and works to some members of the Royal Government. Thirdly, to adjust and move some members of the Royal Government to take charge of works in ministries/institutions relevant to their experiences. Fourthly, to effectively mobilize and use to the maximum their intellectual capabilities according to experiences and good health condition. And fifthly, to offer portfolios and tasks to younger officials with high capabilities and qualifications. Samdech Techo had the National Assembly’s attention that though in-coming officials are more of same faces, their new working attitude will forge changes. It is not necessary true to have changes only with completely new faces./.