We Find Jobs for Our People, but Accused of Making Them Servants Abroad: PM Hun Sen 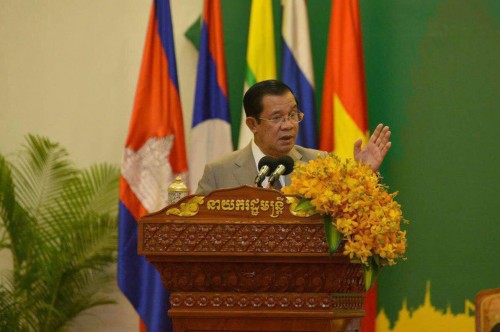 Cambodian Prime Minister Hun Sen wondered why he is criticized for finding job opportunities for people, addressing Tuesday at the opening of the Third Ministerial Conference on Labour Cooperation in Cambodia, Lao PDR, Myanmar, Thailand, and Vietnam (CLMTV).
Held Tuesday in Siem Reap, Cambodia, the meeting convened under the theme “Toward the Protection of Migrant Workers in CLMTV Countries: Cooperation in Social Securities”.
“We face criticisms for sending workers to South Korea, Japan, Malaysia, Thailand, and Singapore,” the premier stated.
“How could we survive without jobs,” he raised questioned in response to critics, saying migrant workers only benefits other countries.
“They [opposition] always accuse us [government] of making Khmer people servants in other countries. Sending workers abroad are not strange. The Philippines is the top country sending workers abroad,” according to the premier.
Cambodian Strongman also wondered why Cambodian migrant workers are accused of being the supporters of the opposition; or why the government is accused of deporting workers abroad.
As of August 2019, Cambodia has approximately 1.2 million workers migrating to Thailand, Malaysia, Japan, Saudi Arabia, Singapore, South Korea, and Hong Kong (China), according to Ministry of Labour and Vocational Training.
The report added that together those workers have sent about USD 2.7 billion in revenue for their families at home.