I Am Faithful to My Nation, PM Hun Sen Says 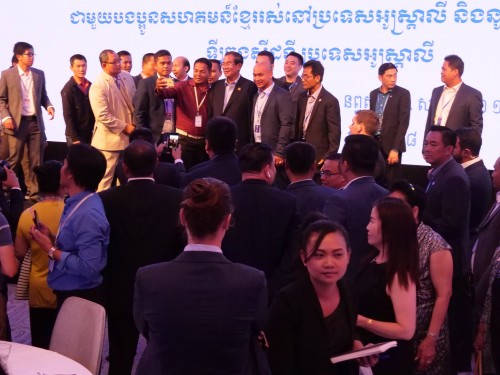 Prime Minister Hun Sen told Cambodian citizens that whoever painted him as other country’s puppet is not important, but his faithfulness to the nation is the most important thing.
His remarks was made during his official visit to Sydney and while meeting Cambodian supporters from Australia and New Zealand on Friday.
“Some people think that Cambodia is biased toward China, but I am in Australia now, is there anything to say? They first said I am pro-Vietnam, but Vietnam-China’s relationship is both good and bad. Am I alone can be a Japanese, Vietnamese and Chinese puppet at the same time? The biggest thing is I am faithful to serve my country”, stated the premier.
“I had enough of being painted. I am a misfortune person. The Communist pole thinks I am liberal, in contrast, the liberal pole thinks I am Communist”, he added.
However, Prime Minister pointed that the GDP per capita for Cambodians was only $400 in 2004, but started to grow steadily, reaching to nearly $1,500 per capita, leaving Cambodia free from low-income country.
By 2030, Cambodia will become a middle-income country, thanks to the stability of the economy. The premier highlighted that corruption is negative for the country’s development. In order to achieve this growth, Cambodia must also strive to eradicate corruption.