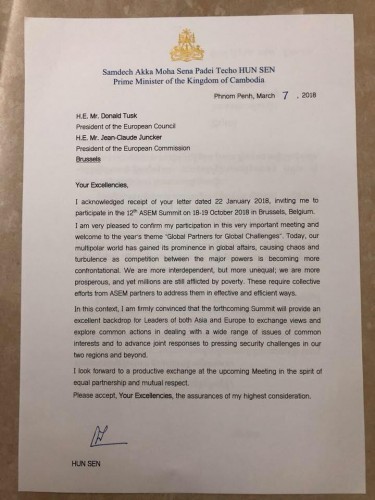 Cambodian People’s Party (CPP)’s spokesman Sok Eysan, on Friday, said that the invitation of the European Union for Prime Minister Hun Sen to attend the Asia-Europe Meeting in Belgium, was like “hitting the heads of the opposition groups”.

The dissolved opposition party groups were frustrated by the invitation, a reflection that European Union did not impose sanctions against Cambodia.

“The European Community turned away from us and even invited Mr. Hun Sen to attend the Asia Europe Meeting in October 2018,” a Cambodian living in France and a member of the opposition group Chamroeun Duong, who criticized the Royal Government of Cambodia, wrote on Facebook to express his disappointment.

“I never expect this rapid changing political situation of Cambodia, not as the claim of President Sam Rainsy and our working groups in France that believe the EU imposed sanction against Hun Sen’s government. Our work is 100% fail again,” he added.