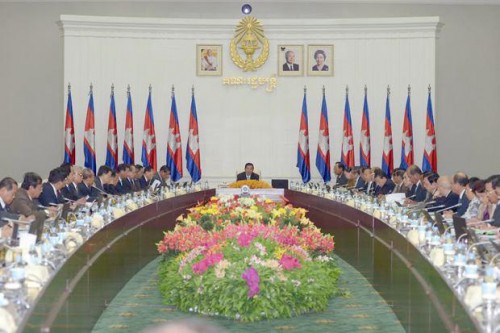 On 17 March 2016, presenting diplomas to graduates of the Norton University, Samdech Techo Hun Sen affirmed that on forthcoming 4 April (the National Assembly) would vote to approve changes of composition of the Royal Government in its proposal to reshuffle the Cabinet for more work efficiency. Samdech Techo hinted that eight ministries would have their ministers changed, while four provinces – Kompong Speu, Kompot, Banteay Meanjei and Svay Rieng, would have new governors as well. “It is for work efficiency. Those ministers to undergo changes are not bad persons. However, (the Royal Government) demands reorganization and strengthening further its work efficiency,” Samdech stressed. Samdech Techo also sent a message to parties in conflict of Funcinpec – those who support HE Nhek Bun Chhay and those who support Samdech Krom Preah – especially those who are holding positions in the Royal Government that as long as they are members of anyone group of (divided) Funcinpec, they may retain their portfolios in the Royal Government. “They may not leave Funcinpec to join the opposition party or other parties that belong to neither HE Nhek Bun Chhay nor Samdech Krom Preah … should they choose to join the Cambodian People’s Party, there would not be a problem.”