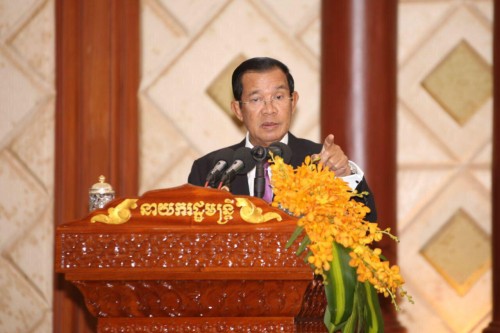 Cambodian Prime Minister Hun Sen said that the withdrawal of EBA trade scheme did not affect Cambodia-Europe relations, speaking at the closing ceremony of the annual meeting of the Ministry of Interior on 14 February 2019.

The premier’s statement was made after European Commission announced on 11 February 2019 to begin the process that could lead to the temporary suspension of Cambodia’s preferential access to the EU market under EBA.

The premier urged for joint solidarity to defend national independence and sovereignty. He also pledged to continue strengthening partnerships with other EU countries and to further improve bilateral relations between EU and Cambodia.

“We will host the Asia-Europe summit as the Heads of State/Government of the European countries will come to Cambodia in 2020 as scheduled. As the host of the summit, we will work with our partner, the European Union, to discuss the topic and process of the meetings,” the premier addressed.

The EU is Cambodia’s largest trading partner, accounting for 45% of Cambodian exports in 2018. Exports to the EU single market reached €4.9 billion in 2018 – almost double the €2.5 billion recorded in 2013, according to the EU Commission’s fact sheet.