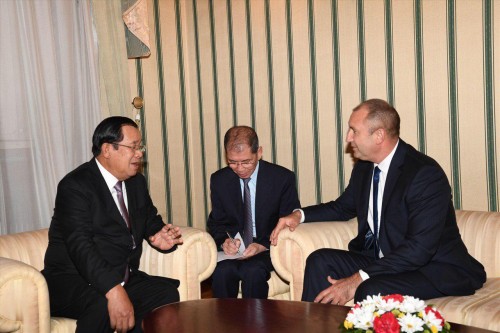 Cambodian Prime Minister Hun Sen told Bulgarian President Rumen Radev that the kingdom wants justice from the EU concerning the attempt to withdraw Cambodia’s access to EU market under EBA framework, speaking in a courtesy call on Bulgarian President on 16 October in Sofia.
The premier informed the president that Cambodia’s democracy is moving forward as evidently shown in the 2018 general elections, where 20 political parties raced in the elections and 83 percent voters turned out.
Prime Minister Hun Sen is conducting the official visit to the Republic of Bulgaria from 15-16 October 2019 at the invitation of H.E. Boyko Borissov, Prime Minister of the Republic of Bulgaria.