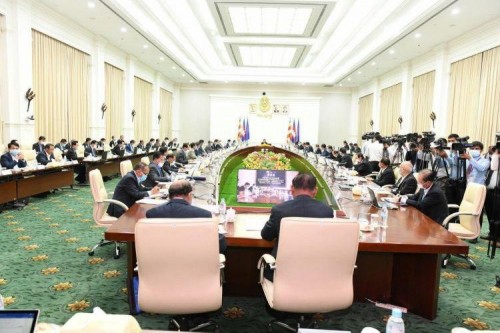 The weekly cabinet meeting, held here this morning under the chairmanship of Prime Minister Samdech Akka Moha Sena Padei Techo Hun Sen, approved the draft law on anti-money laundering and combatting the financing of terrorism.
According to H.E. Phay Siphan, Minister Attached to the Prime Minister and Chairman of the Royal Government Spokesperson Unit, the draft law was approved without any changes.
Earlier, in the same meeting, the cabinet ministers also endorsed the draft law on countering the financing of proliferation of weapons of mass destruction.
The drafting of the two laws did not to satisfy any organisations, but it is the effort of the Royal Government and the National Bank of Cambodia to improve the two legal tools as a member of the Asia Pacific Group on Money Laundering, underlined H.E. Phay Siphan.
The two draft law are aimed to ensure anti-money laundering and counter-terrorist financing by identifying measures to control, prevent, contain, crack down, and eliminate money laundering and terrorist financing in Cambodia’s territory.
Cambodia has become a member of the Asia Pacific Group on Money Laundering (APG) and Financial Action Task Force (FATF) since June 2004.