Critics Do Not Know Me Well, Says PM Hun Sen 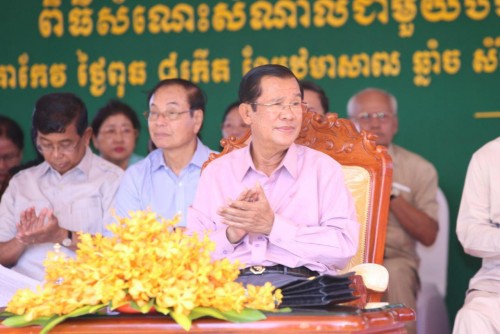 Prime Minister Hun Sen said Wednesday morning that critics do not know him well, addressing to more than 17,000 workers from 13 factories in Takeo province, approximately 70km southwest of Phnom Penh.

The reaction was made in response to the statement that the premier cares more about workers than farmers.

“Those who do not know Hun Sen well should study historical documents related to Hun Sen’s involvement with farmers, not only in Takeo province, but also in other provinces,” stated the premier.

The premier was born in Kampong Cham and he is a leader who has appeared in every situation of the evolution of nation.

People saw him wearing military uniforms at the front line to solve the difficulties for the army and the people who live nearby the battle areas. At the same time, they saw him wearing a suit and tie overseas to seek political resolutions to end wars, and also saw him in the fields chatting with farmers, digging canals.

“20 June 2018” marks the 41st anniversary of the struggle to liberate Cambodian people from Pol Pot regime.

“Although Cambodian people and I currently enjoy peace, I will never forget tens of thousands of drops of tear when I stepped out of the motherland, leaving Cambodian people, especially my pregnant wife. I did not have a better option, as we could not ask for compassion from Pol Pot regime. That risky choices and tears bring happiness and non-stop progress nowadays,” the premier wrote Tuesday on Facebook.