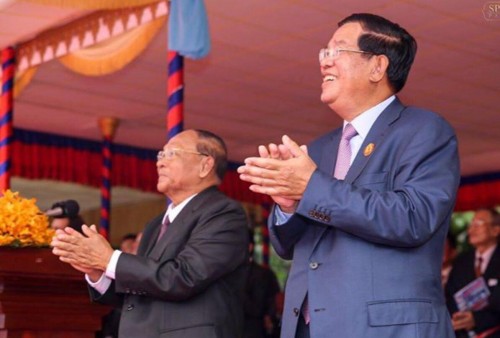 Samdech Akka Moha Sena Padei Techo Hun Sen, Prime Minister and President of the ruling Cambodian People’s Party (CPP), has expressed the CPP’s commitment to continue the culture of dialogue with other parties.
“CPP continues to implement honestly culture of dialogue with Parties that have seats in the National Assembly and the Senate in conformity with principles of liberal democracy, pluralism, and rule of law,” said the premier in his speech at the celebration of the 38th Anniversary of January 7 Victory Day held at the CPP’s headquarters in Phnom Penh this morning.
Dishonesty and insulting one another with bad words and instigation for revenge and violence will not guarantee lasting culture of dialogue, he underlined, adding that it would destroy national unity.
Samdech Techo Hun Sen also reaffirmed the CPP’s attention to increasing cooperation with other political parties, associations, non-governmental organisations, and other circles in society in order to safeguard and expand national achievements.
“This should also help answer needs of the Cambodian people, strengthen peaceful environment in society, including political atmosphere for the forthcoming commune/Sangkat council election – a necessary factor to guarantee a free, fair and just manner that strictly abides by law, order and ethical code of the elections,” said the CPP president.