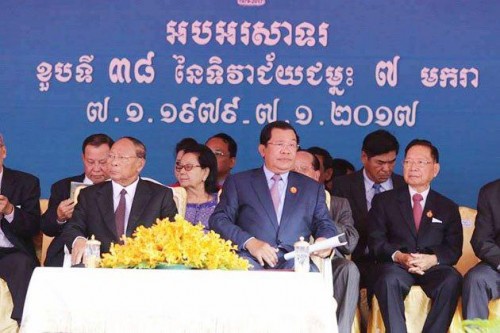 The ruling Cambodian People’s Party (CPP) opposes resolutely controversial actions no matter from which sources they may be that would divide Cambodia again.
The remarks were made by Prime Minister Samdech Akka Moha Sena Padei Techo Hun Sen, President of CPP, while presiding over here this morning the commemoration of the 38th Anniversary of January 7 Victory Day.
“We adhere firmly the spirit of national reconciliation, principle of democracy, and human rights. We are making efforts to resolve different opinions in society patiently, understandingly and in a non-violent manner, by strictly respecting and implementing law,” he said.
CPP resolutely defends the independence, sovereignty, and territorial integrity of the Kingdom of Cambodia, the Constitution, the monarchy, and every national achievement, especially safeguards peace, political stability, security, and firm public order that are essential for guaranteeing progress of democracy and human rights, added Samdech Techo Hun Sen, stressing that CPP will guarantee sustainable and equitable development, while making sure of improvement of people’s harmonious livelihood.
“We oppose external actions that attempt to put pressure on the Royal Government of Cambodia to perform according to their wills under the pretext of democracy and human rights, and consider that as an infringement on competency of a sovereign state and universal principle.” he underlined. “Cambodia cannot accept pressure or interferences, especially those from outside, for changes through color revolution, which is contrary to principle of democracy and rule of law. Such attempt has been creating internal conflicts, instability, insecurity, war, sufferings, refugees, and unjust loss of lives without end on tens of thousands of innocent people in a number of countries.”