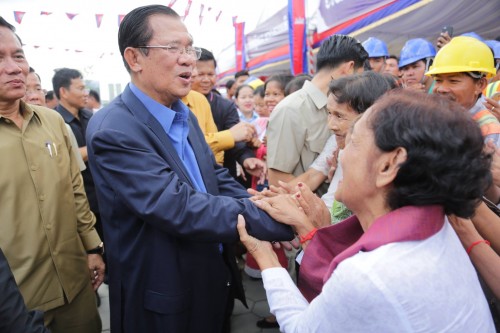 The construction of a cable-stayed concrete bridge crossing the Tonle Sap River in Phnom Penh started this morning in a ceremony held under the presidency of Prime Minister Samdech Akka Moha Sena Padei Techo Hun Sen.
Built by Overseas Cambodia Investment Corporation (OCIC) for about 28 months, this 922-metre-long and 20.5-metre-wide bridge will connect Chroy Changvar development area in Khan Chroy Changvar to National Road No. 5 in Khan Russey Keo with an estimated cost of some US$35.08 million, said Phnom Penh Municipal Governor H.E. Khuong Sreng.
According to Samdech Techo Hun Sen, once finished, this new bridge will become another common achievement of Cambodia as well as of Phnom Penh capital. It will contribute to alleviating traffic congestion on National Roads No. 6 and 5 while the Cambodia-Japan Friendship Bridge, known as the Chroy Changvar Bridge, is being under a two-year renovation, to facilitating the people’s travel and goods transportation from province to the capital city and vice versa, and to reducing the cost of travel from Russey Keo area to Chroy Changvar development area.
The premier also expressed the royal government’s ambition to build a bridge every three kilometres along the rivers across the country.
On the occasion, the premier highly appreciated the development of Phnom Penh, stressing that the capital is now expanded to 700 square kilometres, up from only 300 square kilometres, along with new achievements and necessary infrastructure.