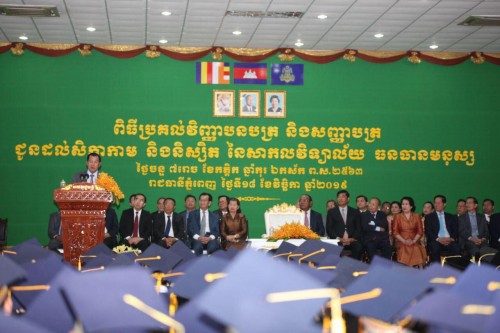 Cambodian Prime Minister Hun Sen has announced the mining explorations of coal and gold in two provinces of Cambodia that can further boost the kingdom’s economy, speaking in a graduation ceremony at National Institute of Education on Monday.
“We have yet used our natural resources such as fuel and coal. Coal has just been found in Oddar Meanchey province that can be used for electricity generation there. Our gold mines, mentioned in the report a few days ago, could generate reasonable amount invested by Australian companies,” the premier underlined.
Yos Monirath, director general of mines resource of Ministry of Mines and Energy, told Fresh News on 18 November that Prime Minister has referred to the report by Renaissance Mining Cambodia Company, which has been granted the right to invest on gold mining in Keo Seima district, Mundolkiri province.
The company said it could mine about 900,000 ounces of gold in the period of eight years [an ounce can earn more than USD 1,460], according to the director general.