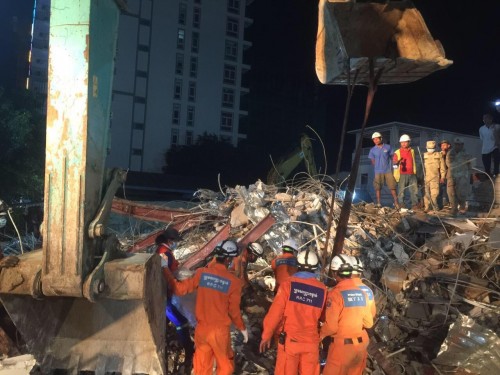 The Chinese Embassy in Cambodia expressed its deepest condolences to the families of the victims of collapsed building and hopes for a speedy recovery of all that are injured in the accident, according to the Embassy’s Facebook post on Sunday.
“The Embassy is greatly saddened by the tragic loss. The Embassy immediately reached out to Chinese enterprises and chambers of commerce in Cambodia, mobilizing human resources, materials as well as equipments including large excavators to help with the rescue,” the Embassy states.
“The Embassy supports a thorough investigation of the accident and necessary measures by competent Cambodian authority in accordance with the law.”
It is worth noting that a seven-storey building in the west coast of Cambodia’s Sihanoukville, about 230 km from the capital Phnom Penh, collapsed at about 5 a.m in the morning of Saturday, 22 June.
As of 9:30 p.m on Sunday, 19 bodies of construction workers found dead and 24 others were injured, according to Sihanoukville govenor Yun Min.
The Chinese-owned 15-meter wide and 30-meter long building, completed 80 per cent, is located near Arunreas Garage in Number 4 commune of Sihanoukville city.
Four people have been arrested for questioning in connection with the accident, including the building owner, head of the construction project, the contractor, and a Cambodian landowner.
Cambodian Prime Minister Hun Sen announced yesterday to donate USD 10,000 to each of the dead victim, and USD 1,250 to those injured, plus free treatment, according to his Facebook post.