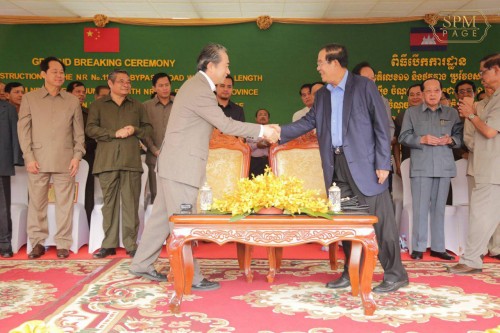 Prime Minister Hun Sen said that the development of China today not only enhances the livelihood of the Chinese people, but also plays a major role in contributing to other countries, including Cambodia. In particular, China’s aid to Cambodia not only helps boost Cambodia’s economic growth, but also strengthens political independence.

His remark was made during the inauguration of rehabilitation project of National Road 11, with a length of 96 km, under the government’s concessional financing of more than $94 million on Friday morning in Prey Veng province.

“If China becomes a rich country with good diplomacy in respect to independence, sovereignty and helping other countries, we will benefit from China’s development. In China’s history, China has never led army to any countries, so we should not worry about the China’s growth. In a comprehensive strategic partnership, we welcome and admire China’s growth, which is helpful for China itself and other country’s economic development”, stated the premier.

“It is so important that other CPP leaders and I have a political consensus with the People’s Republic of China”, he added.

Regarding the comprehensive strategic partnership in 2010, China has become the largest aid provider, lender, and investor in Cambodia.

The Chinese government has provided loans to build roads and bridges in Cambodia for a total of more than $2.5 billion, according to the Ministry of Public Works and Transport.