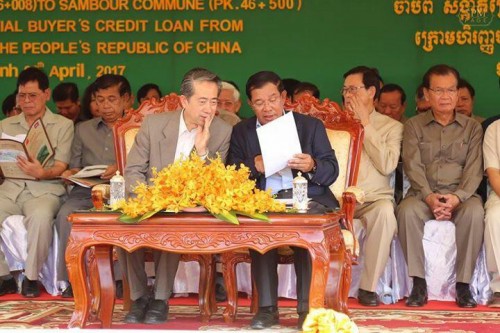 Phnom Penh (FN), April 6 – The Chinese government expressed strong confidence that the premier will lead Cambodia to a brighter future.

Both governments have worked closely since 1997.

Chinese Ambassador to Cambodia, Xiong Bo, shared China’s sentiment during the opening of National Road No. 6 on Thursday morning.

He stated that he was very pleased to see improvements in Cambodia’s political stability and economic development.

“Cambodia has become a country with a vibrant economy and a potential for foreign enterprises, including Chinese. I believe the future of Cambodia is bright,” added the Ambassador.

Communication and cooperation in international affairs between the two countries has become closer and stronger than ever in the wake of the premier’s visits in 1999 and 2010.

The two sides maintain mutual respect for each other and provide support to jointly safeguard the relationships between China and ASEAN countries, as well as peace and stability in the region.

China is the largest trading partner and largest source of foreign investment in Cambodia.

The trade volume between the two countries has increased steadily and is expected to achieve $5 billion in 2017.

The Chinese government has provided loans for the development and construction of large-scale infrastructure, including seven bridges to cross the river and road construction.

By 2016, the Chinese government had provided grants and loans totaling approximately $3.5 billion to Cambodia.