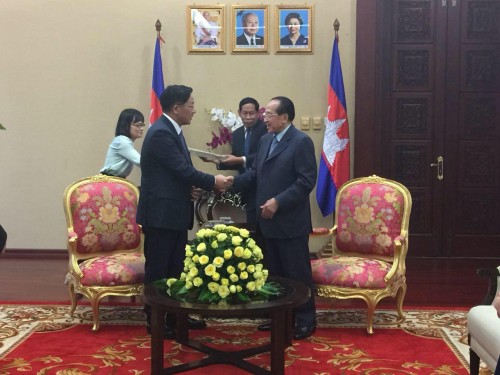 The remarks were made after a meeting between former Cambodian foreign affairs minister Hor Namhong and his counterpart Hu Zhengyue with the presence of Chinese Ambassador to Cambodia Xiong Bo at the Cambodia-China Friendship Palace on Monday.

Cambodian and Chinese bonds have long been established; the official diplomacy was initiated by King Father Norodom Sihanouk and that today His Majesty King Norodom Sihamoni and Prime Minister Hun Sen still embrace the ties with other Chinese leaders.

H.E Hor Namhong said that China has aided Cambodia on all sectors through grant aids and concessional loans.

He indicated that, as of today, China has helped Cambodia build 2,000 kilometers of road and of seven major bridges across the rivers.

China recently started the constructions of the new airport in Siem Reap and Phnom Penh-Sihanoukville Expressway.

China’s investment in Cambodia reached over US$16 billion as of 2017, especially in infrastructure, construction, and hydropower projects.

Cambodia’s economic development can not be cut off from China’s support, he underlined.