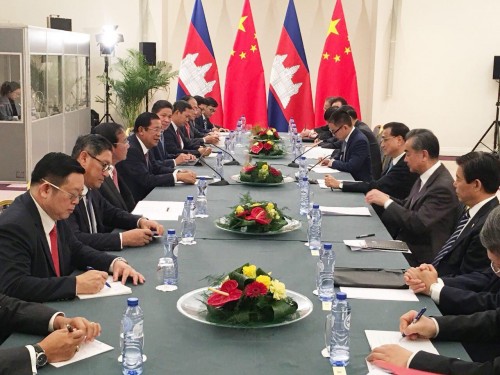 Chinese Prime Minister Li Keqiang said China always supports Cambodia’s roles in organizing meetings, including the hosting of the 13th Asia-Europe Meeting Summit in 2020, speaking in a meeting with Cambodian Prime Minister Hun Sen on 18 October 2018 in Brussels, Belgium on the occasion of the 12th ASEM Summit.

Prime Minister Hun Sen also invited his Chinese counterpart to attend the 13th ASEM Summit to be held in Cambodia by 2020.

Li reassured that China will continue to import Cambodian products to China. As of today, Cambodia has a quota of 300,000 tons of rice exports to China.

The first ASEM meeting was held in March 1996 in Bangkok, Thailand. Currently, ASEM has 53 partners.

Cambodia became a member of the forum since the 5th ASEM Summit held in Hanoi on 8 October 2004.