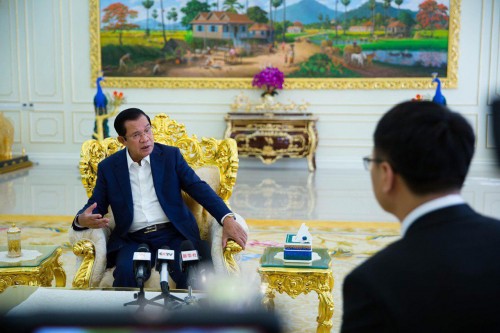 Cambodian Prime Minister Hun Sen gave an exclusive interview to top Chinese media, including China Radio International, Xinhua, and CCTV, held on 9 September 2019 at his residence in Takhmao to congratulate the 70th anniversary of the founding of People’s Republic of China.
Prime Minister said that China has played a crucial role in promoting peace, stability, and development in the region and beyond.
“With its land area less than 10 percent of the world’s total, China feeds nearly 20 percent of global population. Over the past years, China has become the world’s second largest economy that no one expects. These are the great achievements under the leadership of the Communist Party of China that must not be overlooked.”
Over the past decades, China’s economy has enjoyed robust growth and her people’s livelihood has remarkably improved, the premier stated adding that: “Apart from self-development, China has brought prosperity to the region and the world. President Xi’s Belt and Road Initiative (BRI) has provided tremendous opportunities and advantages to the participating countries, including Cambodia to accelerate the improvement of infrastructure such as roads, ports and airports, as well as special economic zones.”
“Cambodia’s Rectangular Strategy is in line with China’s BRI. Both will work together in the long term under the framework of comprehensive strategic partnership and iron-clad friends,” he stated.
According to Premier Hun Sen, Cambodia-China diplomatic ties, formally established in 1958 by Cambodian and Chinese leaders of previous generations, have withstood the test of regional and international vicissitudes and grown stronger nowadays thanks to mutual respect on independence and sovereignty. He took also note that Cambodia adheres to one-China policy.
“I always inform my associates in my party and the government that we adhere to the one-China policy. The respect for the one-China principle is the respect for China’s sovereignty and it is equal to respecting ourselves,” the premier underlined.
“Our long-standing relations between the two countries are based on the principle of mutual respect, trust, benefits and understanding,” he said, adding that: “mutual respect on independence and sovereignty are the special features in our relations.”
Prime Minister also thanks China for providing a great amount of no-string-attached aid to Cambodia. “Without Chinese aids, how could we construct more than 3,000 km of roads throughout the country and eight large-scale crossing bridges,” he said.
“China has helped us connecting to neighbouring countries, a corridor for Cambodia to integrate with ASEAN and Asia continent as a whole.”
Regarding ASEAN-China cooperation, Prime Minister said the ASEAN+3 (China, Japan, South Korea) mechanism and Mekong-Lancang are good cooperation that contribute to regional stability, economic development, and the promotion of trade, investment, tourism, and people-to-people ties.
The Strongman also recommended Cambodia-China media to exchange information; promote cultural values; and support political communication and economic development of the two countries.
He concluded the interview with a great wish and hope for the People’s Republic of China.
“On behalf of Cambodia, and a friend of China, I am optimistic that Cambodia-China relations will continue to grow stronger. I wish the Government and People of China continue to achieve more for the development and prosperity of herself, the region, and beyond.”