Cambodia’s Tax Revenue in 2019 ahead of Plan: PM Hun Sen 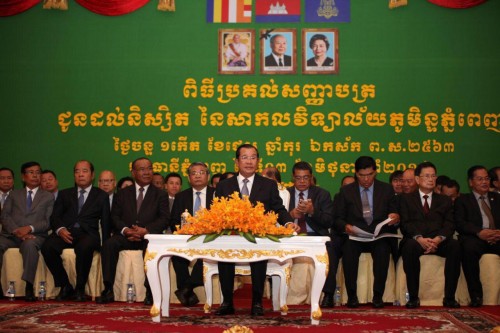 Cambodian Prime Minister Hun Sen said that tax and customs collection in the first five months from January to May 2019 is ahead of the annual plan, speaking Monday at the Royal University of Phnom Penh graduation ceremony at Koh Pich.
“Within the first five months, our tax collection reached more than 58 percent of the year plan, while the customs over 54%,” said the Premier.
Within the first four months of 2019, the government had collected about USD 1,150 million of tax revenue, an increase of USD 240 million, equivalent to 26.4 percent, compared to the same period in 2018, according to the General Department of Taxation (GDT)’s online report.
The report released late December indicated that during the 11 months of 2018, Cambodian government had collected about USD 2,055 million, achieving 106.88% of the plan with exceeding revenue of USD 132.33 million.
At the annual meeting, Director-General of Taxation Kong Vibol appealed for legal reform implementation and fiscal administration modernization through information technology, in particular, the implementation of amended legal instruments. He also recommended the GDT to strengthen and improve enterprise audit; to enhance the value-added tax recovery mechanism; effectively implement revenue mobilization strategy 2019-2023; and promote people’s understanding on taxation.
Speaking at the inauguration ceremony of the USD 50-million “Cambodia-China Friendship Tbong Khmum Hospital” on 1 March, Prime Minister Hun Sen reassured that the government has sufficient budgets to pay salaries to all civil servants and armed forces.