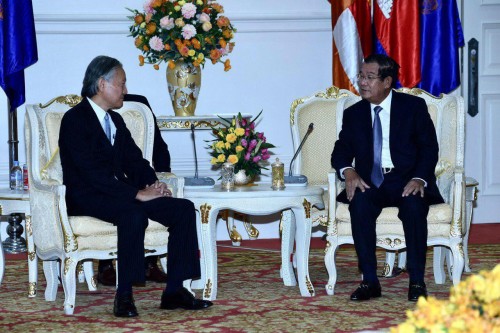 Within the first five months of 2019, Cambodia’s exports to Japan reached USD 1.7 billion, and imported USD 440 million from Japan, Prime Minister Hun Sen stated at a farewell call from Hidehisa Horinouchi, Ambassador of Japan to Cambodia at Peace Palace on Tuesday.
For the whole 2018, Cambodia exported only USD 1.6 billion to Japan, while exported USD 421 million.
Prime Minister praised the ambassador for his major success in strengthening Cambodia-Japan relations and promoting trade, investment, and tourism between the two countries.
Ambassador Hidehisa Horinouchi, who will be leaving Cambodia in the next two weeks to the Netherlands, expressed his great pleasure to be ambassador to Cambodia. During his three-year diplomatic mission, he observed that the Cambodian economy was growing and developing rapidly with significant growth in investment, trade, and tourism.
It is worth noting that Cambodia and Japan established diplomatic relations on 9 January 1953. Cambodia-Japan relations have improved steadily and become a strategic partnership in December 2013.
In 2018, Cambodia and Japan celebrated the 65th anniversary of the establishment of diplomatic relations by exchanging visits of both leaders, and holding joint cultural programs.
So far, Cambodian Prime Minister Hun Sen has visited Japan 22 times, including four official visits in 2007, 2013, 2015 and 2017. In 2018, the Premier attended the 10th Mekong-Japan Summit, which took place from 8-9 October 2018.
Cambodia, in return, welcomed the officials of four Japanese Prime Ministers, including Former Prime Minister Keizo Obuchi on 10-11 November 2000; Former Japanese Prime Minister Junichiro Koizumi attended the ASEAN Summit in November 2002; Former Japanese Prime Minister Yoshihiko Noda participated in the ASEAN Summit in November 2012; and Prime Minister Shinzo Abe paid an official visit to Cambodia on 16-17 November 2013.
Regarding the investment, from 1994 to 2018, Japan has 137 investment projects in Cambodia, with total worth of USD 2.5 billion. Japanese investment capital reached USD 822 million in 2016, USD 863 million in 2017, and USD883 million in 2018 respectively.
Between 1992 and 2018, Japan had provided the equivalent of more than $2.8 billion in Official Development Assistance (ODA) to Cambodia – about 15 percent of total financing by all development partners. Japan has supported major infrastructure projects – building the Kizuna Bridge and the Tsubasa Bridge, improving National Roads No. 1 and 5, developing a new container terminal at Sihanoukville Autonomous Port, and improving flood protection and drainage in Phnom Penh.
Japan is one of the leading countries to provide assistance to the Khmer Rouge tribunal, providing a total of USD 85.12 million from 2005 to 2016, equivalent to 32% of international financial aid. In 2017, Japan has provided an additional USD 1.2 million for international process in the ECCC.