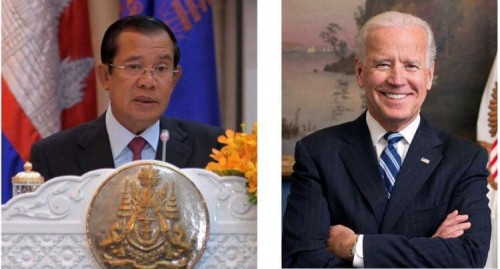 Samdech Akka Moha Sena Padei Techo Hun Sen, Prime Minister of the Kingdom of Cambodia, has recently extended his sincere congratulations to the Honorable Joseph Robinette Biden Jr., President-Elect of the United States of America.
“On behalf the Royal Government and people of Cambodia, it gives me great honour and an overwhelming pleasure to congratulate you on your historical election as the 46th President of the United States of America. Your vast experiences and wise leadership have proven to be the determining factor in earning the trust from the American people. I firmly believe that, under your presidency, the United States of America will thrive and contribute to greater stability and prosperity of the world,” Samdech Techo Hun Sen wrote in his message dated Dec. 15, and shared to the media this afternoon.
“The people and the government of Cambodia have always attached great importance to strengthening and deepening the long-standing bond of friendship between our two countries, which we are in the midst of commemorating its 70th Anniversary this year. Please rest assured that my government is fully committed to work with your Administration to boost our bilateral relations to greater height,” underlined the Cambodian Premier.
Samdech Techo Hun Sen also wished the President-elect, and his Administration, all the best of success in the fulfillment of their historic duty at the helm of the American Nation.