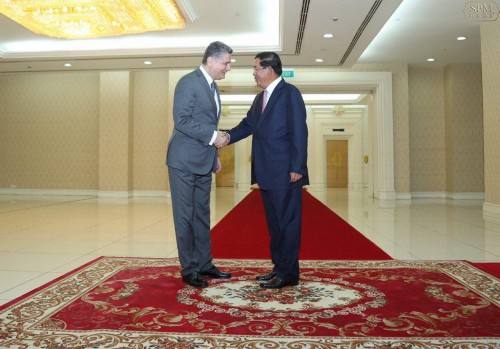 Samdech Akka Moha Sena Padei Techo Hun Sen, Prime Minister of the Kingdom of Cambodia, has expressed the country’s intention to have Free Trade Agreements (FTAs) with the member countries of Eurasian Economic Commission (EEC) in order to open new markets for Cambodian products.
While receiving visiting Chairman of Board of the EEC H.E. Tigran Sargsyan at the Peace Palace, Phnom Penh yesterday afternoon, Samdech Techo Hun Sen said that cooperation can be done between Cambodia and each member of EEC or between Cambodia and EEC itself, and encouraged the Cambodia Chamber of Commerce to work with EEC on this issue, H.E. Kao Kim Hourn, Delegate Minister Attached to the Prime Minister, told reporters after the meeting
The Cambodian premier also laid stress on the necessity of trust building between Cambodia and EEC through reciprocal investment protection and overlapping taxation exemption.
For his part, H.E. Tigran Sargsyan expressed his strong belief over the cooperation between EEC and Cambodia and pledged to discuss Cambodia’s suggestion about FTAs with the EEC’s member countries.