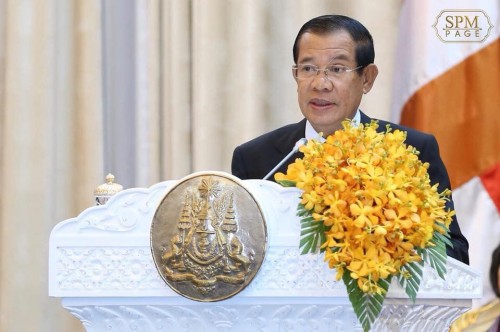 The Asia Europe Political Forum (AEPF) has formally recognised Samdech Akka Moha Sena Padei Techo Hun Sen, Prime Minister of the Kingdom of Cambodia, as honorary founding chairperson of the Asian Cultural Council (ACC), an affiliated institute of International Conference of Asian Political Party (ICAPP).
The information was shared this morning at a press conference at Phnom Penh International Airport by H.E. Ms. Khuon Sudary, a Lawmaker and Member of the Standing Committee of the ruling Cambodian People’s Party (CPP), upon her arrival from London, United Kingdom, where she co-chaired the 2nd AEPF with H.E. Geoffrey Van Orden who represented the European Conservatives and Reformists (ECR) group.
The Forum further recognised Cambodia’s role in securing an accord of cooperation between the ACC and UNESCO which is expected to be signed later this year, she added, stressing that Cambodia will host the inaugural summit of ACC in Phnom Penh in the first quarter of 2019.
According to a press release of CPP, nearly 100 delegates from 25 political parties and grouping representing 15 countries from Asia and 8 from Europe attended the 2nd AEPF held on May 18. They discussed issues of great importance to both continents such as connectivity, climate change, humanitarian and disaster relief.
A London Communiqué was adopted and reaffirmed the shared objectives of peace and sustainable development for the citizens of both continents. The Forum recognised trade and regional connectivity as an effective tool to promote partnership between Asia and Europe.
Beside the 2nd AEPF, the Cambodian delegation attended the 30th meeting of ICAPP Standing Committee, which is comprised of 40 Standing Committee members from 15 countries. The meeting welcomed the appointment of H.E. Ms. Khuon Sudary as vice-chairperson of ICAPP and co-chairperson of AEPF.
The Standing Committee expressed its appreciation to Samdech Techo Hun Sen as honorary founding chairperson of the ACC and his commitment to promote cultural and social connectivity between Europe and Asia.