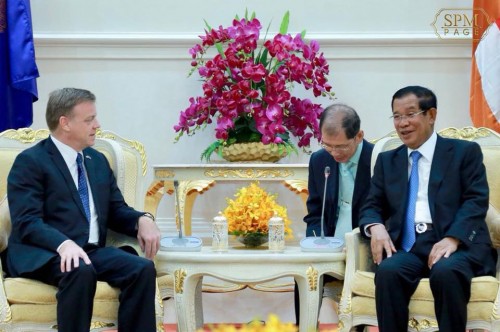 Samdech Akka Moha Sena Padei Techo Hun Sen, Prime Minister of the Kingdom of Cambodia, received here this morning at the Peace Palace outgoing British Ambassador H.E. William Longhurst.
H.E. Eang Sophalleth, Assistant to Samdech Techo Hun Sen, told reporters after the farewell meeting that H.E. William Longhurst expressed his satisfaction with his four-year-and-a-haft diplomatic mission in Cambodia, stressing that the UK as well as himself regarded Cambodia as a friend.
The outgoing diplomat said the British Embassy has paid high attention to the education sector as recommended Samdech Techo Hun Sen during the first meeting with him. He also expressed his optimism over the education system in Cambodia, after he had travelled to the Cambodian provinces.
Beside education, he added, the embassy focuses on the fields of technology and science.
In reply, the Cambodian Premier thanked H.E. Ambassador for having worked hard in promoting the relations and cooperation between the two countries. The cooperation in the above-mentioned domains responds well to Cambodia’s need, he underlined.
Samdech Techo Hun Sen hoped that the UK will continue to support the country’s education sector and wished H.E. William Longhurst more success in his next mission.