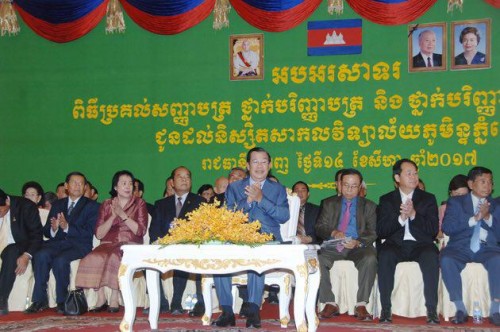 Cambodian Prime Minister Samdech Akka Moha Sena Padei Techo Hun Sen recalled the success of his recent visit in Japan, at a graduation ceremony of the Royal University of Phnom Penh this morning.
Japan promised to help Cambodia to become an upper middle income economy by 2030, he underlined.
The premier said Cambodia is seeking support from Japan to the construction project of an 18-kilometre sky train from the Central Market to Phnom Penh International Airport worth some US$800 million.
Samdech Techo Hun Sen led a high-level delegation to pay an official working visit in Japan, from Aug. 6-9, during which he was warmly received by Japanese Prime Minister H.E. Shinzo Abe who organised a surprise birthday party for him.