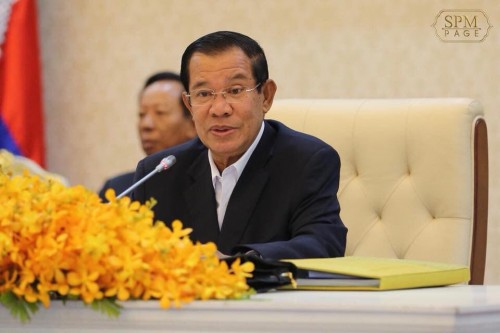 Source: AKP
Prime Minister Samdech Akka Moha Sena Padei Techo Hun Sen has rejected the accusation of the self-imposed exile politician Mr. Sam Rainsy, former president of the dissolved Cambodia National Rescue Party (CNRP) over the number of Likes for his Facebook page.
The reaction was made here this morning at the graduation ceremony of 4,000 students of Western University after Mr. Sam Rainsy has claimed that his lawyer in the United States has filed a request to the U.S. court to order Facebook to provide information and data indicating that Samdech Techo Hun Sen uses this social media network to mislead the public by inflating fake popularity.
In reply, the premier said he (Mr. Sam Rainsy) has no job to do, that’s why he filed a complaint to the U.S. court for such issue.
As of Feb. 13, 2018, Samdech Techo Hun Sen’s official Facebook page got 9,470,207 Likes and 9,429,726 followers.