Cambodian PM Meets Chairman of the Senate of Pakistan 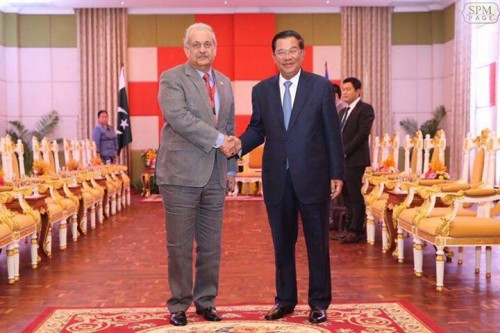 Samdech Akka Moha Sena Padei Techo Hun Sen, Prime Minister of the Kingdom of Cambodia, received this morning H.E. Mian Raza Rabbani, Chairman of the Senate of Pakistan, on the sidelines of the 9th Plenary Session of Asian Parliamentary Assembly hosted by Cambodia in Siem Reap provincial city.
On the occasion, Samdech Techo Hun Sen expressed warm welcome to H.E. Mian Raza Rabbani’s presence in the 9th APA Plenary Session and requested the Pakistani side to further boost the economic, trade, tourism and investment relations with Cambodia, said H.E. Sry Thamrong, Delegate Minister Attached to the Prime Minister.
The Cambodian premier also showed his regret that he could not visit Pakistan this year due to his busy schedule in the country, adding that he cancelled some foreign trip including to Sri Lanka, Australia, and New Zealand as well.
Samdech Techo Hun Sen spoke highly of the cooperation between Cambodia and Pakistan and suggested a bigger commemoration of the 65th anniversary of the establishment of diplomatic ties between the two nations next year.
For his part, H.E. Mian Raza Rabbani expressed thanks to Cambodia’s support and cooperation under the APA’s mechanism and initiatives.